On August 21, 2007, the crew aboard the Space Shuttle Endeavour hurriedly completed their pre-landing checklists. Although these tasks had been performed hundreds of times before on previous shuttle missions, this time was different. Mission STS-118 would be the first time a Space Shuttle would navigate from reentry to landing using the Global Positioning System (GPS) in place of traditional terrestrially-based TACAN navigation. It was a culmination of 15 years of exhaustive design, testing and integration by NASA and civilian engineers who had the task of integrating GPS technology into the numerous primary and backup computer systems onboard the shuttle. 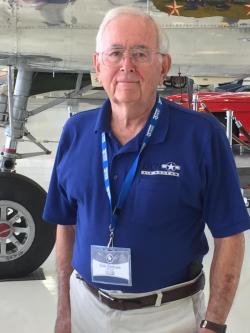 Once the crew were in their pressurized reentry suits and strapped into their seats, the shuttle began to re-enter the earth’s atmosphere over the Indian Ocean. Traveling at hypersonic speeds, and devoid of any means of propulsion, every maneuver had to be absolutely precise in order to glide the shuttle thousands of miles across several oceans and continents to a safe landing at Kennedy Space Center (KSC) on the east coast of Florida. Any error in navigation, no matter how slight, could end in disaster.
As the intense heat generated by re-entry began to subside, and the darkness of space gave way to light, a precision navigation solution from three on-board GPS receivers was fed into Endeavour’s flight computer system. The result was a perfect touchdown of the massive space vehicle on Runway 15 at KSC and the safe return to earth of the seven astronauts on board.
Lyon Air Museum Docent, Dr. Dirk Dedoes, knows a thing or two about GPS and the integration of this technology into the space shuttle, undoubtably one of the most complex machines ever built. Over the course of his 55 years as both a United States Air Force (USAF) officer and civilian government contractor, Dr. Dedoes has had the privilege of working on some of the most ambitious and complex aerospace projects of the 20th century.
A native of the Los Angeles area, Dr. Dedoes attended San Diego State University (SDSU), graduating in 1961 with a Bachelor of Science in Aeronautical Engineering. Having attended the Reserve Officer Training Corps (ROTC) in college, he also received a regular commission in the USAF as a 2nd Lieutenant. Designated to be a pilot, Dr. Dedoes obtained his Private Pilot Certificate through the USAF as the mandatory first step. However, his orders for flight training were unexpectedly changed and, instead, he was sent to the University of Southern California (USC) to obtain a Masters of Science degree in Aerospace Engineering.
Dr. Dedoes remembers: “The Air Force changed my orders and took me out of flight school. It was unusual, as I had already started the training program by earning a Private Pilot Certificate. Looking back, I think the Cold War and the arms race in missile technology had something to do with it. The Air Force needed people to work on those development programs and, since I already had a degree in engineering, they believed my education would be better used in those areas."
A few years into his time at USC, the Air Force asked if he would be interested in earning his doctorate degree as well, to which Dr. Dedoes eagerly agreed. After completing the Masters program and all Ph.D. coursework, he was ordered to the Seiler Research Laboratory at the Air Force Academy in Colorado Springs, Colorado. As Dr. Dedoes recalls: “Most of the chain of command at the laboratory already had their Ph.D. degrees and several of the other junior officers such as myself were able to finish their Ph.D. dissertations in conjunction with the lab’s ongoing research in disciplines such as Guidance, Navigation and Control (GN&C). One of my major projects at the academy was developing maneuvering tactics for F-4 and F-105 fighter jets to evade the Soviet SA-2 surface-to-Air (SAM) missile, which is the type of SAM that shot down a U-2 in May of 1960. These missiles were also taking down quite a few of our aircraft in Vietnam.” For this work Dr. Dedoes was a co-recipient of the 1968 Office of Aerospace Research Technical Achievement Award: “For contributions to the analysis of fighter aircraft operation in a high threat surface-to-air missile environment.” 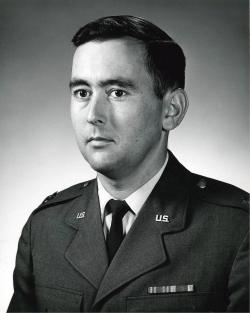 After completing his tour at the Seiler Laboratory, Dr. Dedoes was assigned to the Air Force Institute of Technology (AFIT) at Wright-Patterson Air Force Base in Ohio. Arriving in July of 1969, he became an Assistant Professor of Electrical Engineering where he taught classes, conducted research projects in GN&C, presented papers at technical conferences, and mentored young USAF officers seeking masters or doctorate degrees in engineering disciplines. One interesting research project, conducted by his students, involved the development of a fire control technique for launching Air-to-Air missiles in a highly dynamic fighter aircraft environment."
In 1973, Dr. Dedoes was transferred to Vandenberg Air Force Base, on the central coast of California, where he worked on upgrading the range safety control hardware and software system that monitors each missile launch from Vandenberg. This system, operating in concert with the range safety control team, determines if the missile stays on the intended flight course or strays off in an abnormal manner. If the deviation exceeds safety parameters, then appropriate action is taken by the safety team. 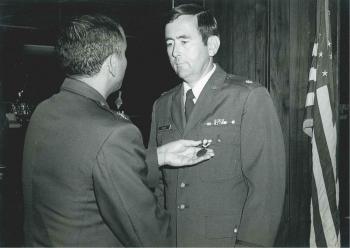 In 1976, Dr. Dedoes returned home to the Los Angeles area where he was assigned to Los Angeles Air Force Base to work on space systems development at the Space and Missile Systems Center. “One of our more interesting projects in Los Angeles was developing an anti-satellite weapon that could be launched from an F-15 fighter jet. The aircraft would climb to above 50,000 feet and launch the interceptor missile. In its terminal phase, the interceptor, which was about the size of a wine barrel, would place itself in the orbital path of the intended target satellite. The intercept concept is akin to a mine used in naval warfare; it waits for the enemy vehicle to come along and detonates when it comes in contact with the target.”
In 1981, Dr. Dedoes retired from the USAF with the rank of Major and began his career as a civilian defense contractor. “After twenty years of moving and reassignments, my family and I wanted to settle down in one place and have some stability,” he recalls. “We were already living in Orange County, and I was going to be doing generally the same type of engineering work as a civilian as I had done in the military, so it was a pretty smooth transition for us.”
Employed by a company called Intermetrics, he began working on a government contract for the analysis, testing and integration of GPS navigation software into military applications. “Looking back, GPS technology has changed quite a bit since then,” Dr. Dedoes remarks. “Back then the GPS hardware units were relatively large pieces of equipment that in some cases weighed over 50 pounds and were rack-mounted. Today that same technology fits on a silicon chip about the size of a human fingernail.”
Dr. Dedoes recalls: “One of our programs at Intermetrics involved integrating GPS technology into a full avionics suite for military aircraft. This effort was the forerunner of a modern GPS avionics suite wherein the navigation system drives the flight instrumentation and can be programmed with GPS waypoints which the aircraft can fly independently from takeoff to touchdown with minimum pilot interaction.”
“Many of the defense projects I worked on as a civilian could be placed under the banner of software Independent Verification and Validation (IV&V). You can think of IV&V as very high-level quality assurance (QA) for the software running these avionic and navigation systems. The companies I worked for did not write the software code, but we independently verified it through exhaustive analysis, testing and debugging. When we found a problem we documented it and sent it back to the developer for remediation. When you are dealing with fighter jets, ballistic missiles and space vehicles, even the most minor software bug could result in catastrophic failure and potentially the loss of life.”
Dr. Dedoes started working with NASA on space projects after the Challenger space shuttle accident in January of 1986. Though the disaster had nothing to do with computer software, NASA did not want to take any chances on losing another shuttle and crew. Desiring the same type of quality assurance applied in defense projects, the Intermetrics team began performing IV&V on the complicated flight software that runs the computers onboard the spacecraft. “That was a precursor to many NASA projects I would work on in the following years,” Dr. Dedoes explains. “Following the shuttle came projects such as the Mars Exploration Rover, Spitzer Space Telescope, and Deep Impact projects, as well as the Kepler, Dawn, Grail, Solar Probe Plus and James Webb Space Telescope projects.” Choosing to share his experience and knowledge, Dr. Dedoes also co-authored and presented over a dozen papers on GPS and other aerospace related topics at technical conferences and symposiums.
Dr. Dedoes retired from the defense industry in 2016 after 35 years of service. During his periods of service with the Air Force, NASA and industry, Dirk never lost his passion for flying. In addition to obtaining his Private Pilots Certificate as an Air Force requirement, he has logged time in Cessna 140, 150, 172 and 210 aircraft, the Blanik L13 glider and the Mooney 201, and has flown in the Lockheed T-33 and the iconic P-51 fighter. Today he generously volunteers his time with Lyon Air Museum where he helps educate not only museum guests, but fellow docents as well. His favorite activity in the museum is instructing others on virtual flying using the museum’s Cessna 172 Flight Simulator. His fascinating background and wealth of knowledge has proven to be an incredible asset to the museum. For his service to his country, we thank him; and for his selfless dedication to the museum and our mission, we are extremely grateful.
Written By Dan Heller
lyoneair2020-10-15T04:45:38+00:00
Go to Top