For more than half a century American nuclear submarine forces have played a cat and mouse game of hide-and-seek with their adversaries; a perpetual effort to detect, identify and track these silent yet deadly submerged machines capable of inflicting massive damage on their enemies.
At the American forefront of this effort is the venerable Lockheed P-3 Orion. Outfitted with a dazzling array of sensors, the P-3 is capable of deploying bombs, missiles, torpedoes and mines, both conventional and nuclear. The P-3 is also capable of dropping multiple sonobuoys, with acoustic information transmitted to an on-board analyst for quick identification. In addition the P-3 has proved indispensable in maritime reconnaissance and Search and Rescue (SAR) opera-tions in oceans across the globe. So effective is the Orion that it is one of only a handful of US military aircraft to reach 50 years of continuous service.
Lyon Air Museum Docent Commander William “Bill” Lindsey USNR (Ret.) fondly remem-bers his time commanding a P-3 in the Pacific, including several tours of duty during the Vietnam conflict. There the P-3 was tasked with not only Anti-Submarine Warfare (ASW), but also with low-level surveillance of ships suspected of transporting arms and supplies to North Viet-namese and Viet Cong forces. 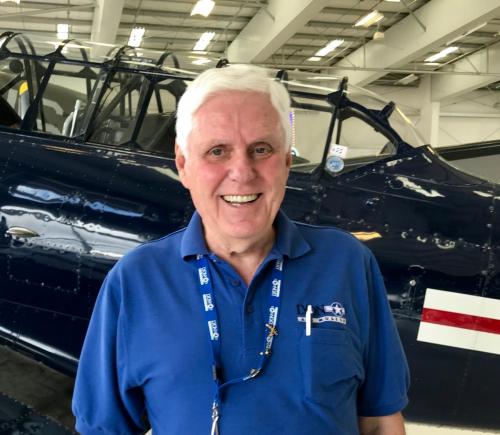 Bill originally hails from Gulfport, Mississippi. Graduating high school in 1961, he went on to attend Millsaps College, where he joined the Navy Reserve Officer Candidate Program (ROC). After completing Navy Officer Candidate School (OCS) in Newport, Rhode Island and graduating college, he received a commission as an Ensign in June of 1965, one year after the Gulf of Tonkin Resolution which escalated American involvement in Vietnam.
Once commissioned, Bill’s first posting in the regular Navy was to the USS Rankin (AKA/LKA-103), a WWII-era attack cargo ship based in Norfolk that was designed to deliver Marine troops and military supplies to shore. Though serving on a ship had always been appealing to Bill, the harsh realities of extended tours at sea made him reconsider. Wanting to remain in the Navy, he began to look at other opportunities within the service. Fortunately for him, he had a cousin who was a Navy F-4 Phantom pilot that happened to be stationed at Norfolk at the same time.
“It was my cousin who introduced me to the idea of being a naval aviator” Bill remembers. “He even arranged for me to take a flight in a Phantom. Despite losing my lunch, it both in-trigued and interested me. I was also enchanted with the aviator lifestyle, and saw it as a much better path to promotion than being a junior officer on a cargo ship.”
In January of 1967 Bill reported to Navy Flight School in Pensacola, Florida. After soloing on a T-34 single-engine piston aircraft he was ordered to training at NAS (Naval Air Station) Whit-ing field where he soloed in the T-28. Bill recalls “my training at Whiting Field was more about precision flying than anything else. Navigation, formation flying and aerobatics were emphasized. The purpose was to develop and strengthen flying skills, stick-and-rudder skills that teach the pilot how to master control of the aircraft.” At the conclusion of his time at Whiting Field Bill completed carrier qualifications, the most challenging flying skill of all and what sets naval aviators apart from all other pilots.
After Whiting Field he received orders for advanced flight training in Corpus Christi, Texas where he flew the TS-2A, the training version of the S-2. “In Corpus Christi the emphasis was on navigation and instrument flying, which would prove very useful in some of the environments I ended up flying in.” He received his wings in spring of 1968, and was assigned to Patrol Squadron 4 (VP-4), a P-3 squadron in Hawaii. However, Bill still had to undergo additional rig-orous training specifically for the operations and missions of the four-engine turboprop Orion. That was accomplished at NAS North Island in San Diego. “The training in North Island was more tactical in nature. Nuclear weapons delivery, search and evasion techniques and so forth.” After two months at NAS North Island Bill went to NAS Moffett Field in the San Francisco bay area to complete his P-3 training. 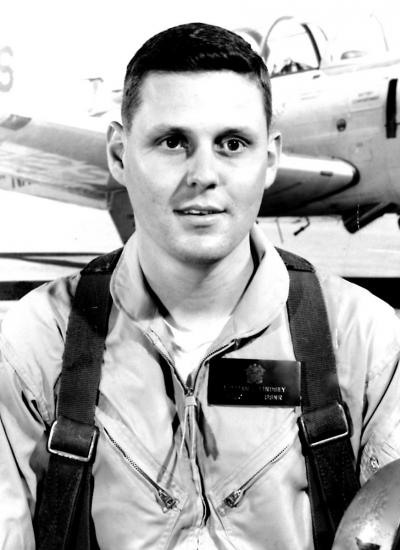 In January of 1969 Bill reported to Patrol Squadron 4 (VP-4). Officially based at NAS Bar-bers Point in Hawaii, when Bill arrived the squadron was on rotation to Iwakuni in southern Japan. Although the primary purpose of the P-3 is Anti-Submarine Warfare (ASW), the crews and aircraft of VP-4 were primarily tasked with shipping surveillance of the waters off eastern Asia, looking for vessels carrying weapons and other contraband being shipped from the Soviet Union to North Vietnam. He started as third pilot, who also filled the navigator position on the aircraft. After about 6 months he qualified for co-pilot and nine months later qualified for Patrol Plane Commander (PPC).
“VP-4 consisted of nine P-3 aircraft and twelve flight crews. At that time P-3 squadrons from Moffett Field and Barbers Point deployed for six months to Marine Corps Air Station (MCAS) Iwakuni in southern Japan, Naha Air Base in Okinawa, Republic of Vietnam Air Force Base Cam Ranh Bay in Vietnam and Naval Station Sangley Point in the Philippines. Daily patrols were flown from each of these bases. Periodically, a crew would fly a five-day patrol starting in Iwakuni, overnighting in Naha, then Cam Rahn Bay, ending in Sangley. After a day of crew rest, we would repeat the trip in reverse order. We would typically fly at 10,000 – 15,000 feet. When the radar operator picked up a contact we would drop down to about 200 feet above the water and make a couple passes, taking pictures from both sides as well as from above and recording the ship’s nationality, course, speed and any suspicious cargo stored on the deck. Also, we would receive orders to locate and photograph ships, usually Soviet picket ships or combat-ants that had already been flagged as suspicious, confirming their nationality, navigational course and other details. Surveillance missions typically were about eight hours in duration.”
After six months of rotation through Asia Bill’s squadron returned to Barbers Point for what was supposed to be a 12-18 month hiatus from combat deployment. However not long after returning to Hawaii the squadron was ordered to Adak, Alaska for a six-month deployment, where the primary mission returned to ASW patrols.
“In Adak we would drop sonobuoys and then orbit at about 20,000 feet, monitoring the transmissions and looking for signs of Soviet submarines. On these missions we were sometimes in the air for ten hours or more. Flying in Adak was often a challenge due to weather, and that is where instrument flying skills really came into play. In terms of weather and climate, going from Hawaii to Alaska was about the greatest contrast you can find. For my first landing in Adak we were on an instrument landing approach, and I remember looking down at the runway and seeing nothing but aircraft tire tracks in the thick snow. Also in Adak, because of the alignment of the runways, there were lots of heavy crosswind and tailwind landings, which can be very challenging.”
Bill served as PPC for his last six-month deployment in Iwakuni, leaving the squadron with over 2,000 hours of flight time. 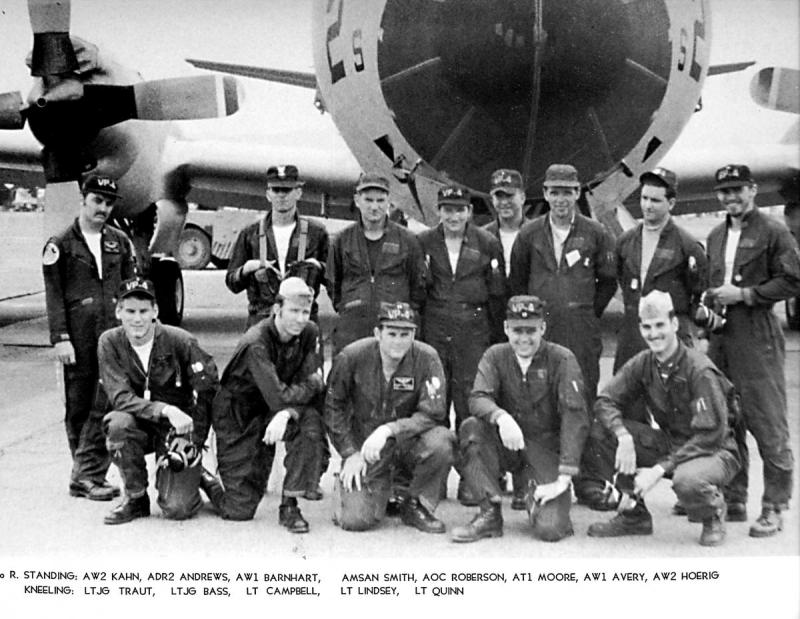 After VP-4 Bill served a three-year tour in the Office of the Ombudsman at the Bureau of Naval Personnel, an initiative of Admiral Bud Zumwalt (then Chief of Naval Operations) to improve living conditions, advancement, and morale of naval personnel. The Ombudsman Office monitored officer and enlisted retention, measured and made recommendation for improving navy life and retention, and researched and responded to letters and phone calls from sailors and dependents making complaints or giving suggestions. Bill still laughs about one particular incident during this time. “We received a letter from the wife of a sailor, complaining about him constantly being away from home on sea duty. When I looked into it, I found the sailor had actually been requesting constant sea duty!” Bill left active duty in 1974 as a Lieutenant Commander, and joined the Navy Reserves where he completed his military service. He ultimately retired at the rank of Commander in 1984 after 20 years of service.
Upon leaving the Navy Bill worked in civilian defense contracting, including a stint with a company providing logistical support and training to the Iranian Air Force for their fleet of Grumman F-14 Tomcat aircraft before the revolution of 1978 that overthrew the Shah. Relocating to southern California in 1980, Bill then went to work for Hughes Aircraft, managing business development, training, support systems and depot repair facilities for foreign military defense contracts.
It was during his time at Hughes that Bill decided to go back to school, earning Masters, Executive MBA and Ph.D. degrees in Management from Claremont Graduate University. For his Doctoral Dissertation Bill chose the subject of how goals and strategies are defined and disseminated within large organizations and companies, utilizing his experiences at Hughes for much of his material.
In 1991 Bill left Hughes and began his own consulting firm. However, several years later he made an unexpected and significant career change when he began teaching part-time at Pepperdine University, something he found enjoyable and immensely satisfying. Though he had never taught at the university level before, being in the classroom and mentoring young professionals turned out to be a new life calling for him. One day he received a call from a dean at Loyola Marymount University (LMU), offering him a consulting position in their new executive education department. This modest consulting job grew into a role as an instructor, and eventually culminated with the position of Associate Dean for the College of Business Administration and Director for the Center of Executive Learning. Bill retired from LMU in 2013 after nineteen years.
Joining the docent team at Lyon Air Museum in June of 2015, Bill has enthralled countless museum guests with tales of his time spent as a naval aviator, patrolling vast expanses of ocean in the neverending quest to secure peace and tranquility to our nation. For his selfless service to our country and dedication to the museum we give both our heartfelt gratitude, and eternal appreciation.
Article Written By: Dan Heller
lyoneair2020-10-15T04:45:38+00:00
Go to Top